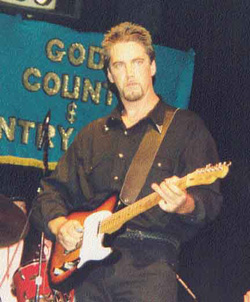 Ken LaVoie began playing guitar when he was ten years old, focusing on old folk tunes, beach boys and Elvis. In 1977, Ken moved to Rhode Island with his Father, who bought him his first guitar (a Yamaha FG-110 acoustic), and introduced him to the more emotional overtones of the blues and rock and roll. "Music for the neck down" as Ken's guitar hero Keith Richards would say.

Ken remained a "closet musician" until 1997 when an employee of his lawn care company asked him to become the lead guitarist for the band he was playing drums for at the time (Cherokee, later named Rick West & Cherokee). He then spent the next 2 years transitioning from rock n roll and blues to the twang of country, trading in his Stratocaster for its simpler but twangier cousin the telecaster. Cherokee had a great run, opening for headliners such as Blake Shelton, Darrell Worley, Buddy Jewel, Mark Willis & the Bellamy Brothers.

Cherokee continued its stealthy climb, gaining popularity and winning many state-level music awards from the Pine Tree State Country Music Association In 1999, & 2000 Ken won "instrumentalist of the year" from the same organization and was given the chance to compete, along with the Cherokee Band, in Las Vegas at the Country Music Organization of America's annual competition. Ken won "instrumentalist of the year" on the international level, which was his "crowing achievement".