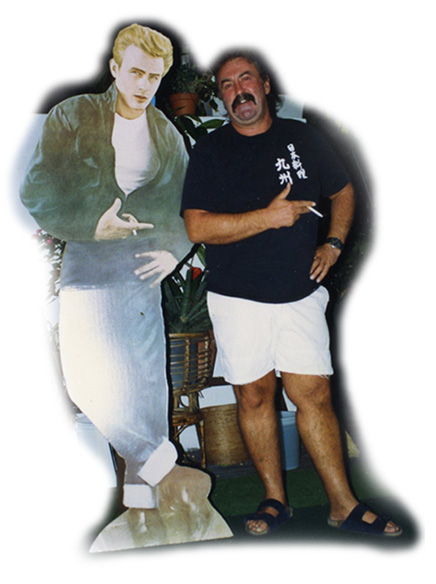 
I 'd like to use words to define my father, to paint a clear and beautiful picture of him, but I'm afraid there aren't any words large enough to capture his mystery, and his spirit was far more colorful than the product of any artist's waving about. If Hemmingway were alive today, he would write about my father. He was born and raised in Chepachet (Glocester) Rhode Island, and lived much of his life in Key West and Cambodia. His writing was one of his legacies.
I think instead that the people he left behind are the canvas. All of them--or all of you--if it be the case, are chapters and verse in his story and brush strokes on the funny, deep, sad and fantastic canvas that was his life. I, hopefully, am his signature. I know that my Dad died searching for, and finally finding, his place among men. What gives me comfort is the thought that his spirit was just too large and bright to survive here - The only reason he lasted as long as he did is that God just couldn't bear to take such color from our lives.
My Father was fun to talk with. Unless of course you made the mistake of holding an opposing political view, then you'd wish you'd kept silent.
He was a multi dimensional man: A hard, firm father when I needed a boot in the rear, a comedian almost ALL of the time, and his Gandhi like spirit was like a warm breeze to everyone. Something very important he gave to me was a sense that no dream I had was out of reach. When he and I spoke of my dreams or plans, he was almost casual in his attitude that I could accomplish, with relative ease, anything I wished to accomplish.
I had the good fortune of attending a weekend "right of passage" called the Sterling Men's Weekend in October of 1999. During that weekend I learned what my job as a son was. To show my father that I would be "ok" and that his job was done, so that he could let go and prepare to die. I worked very hard over the next few years to show him just that and I believe he "got it".


"Step aside Angels, A Warrior is coming to Join You"
Written by LaVoie, son of Ken, Sterling Men's Weekend of October 1999