Music for the neck down 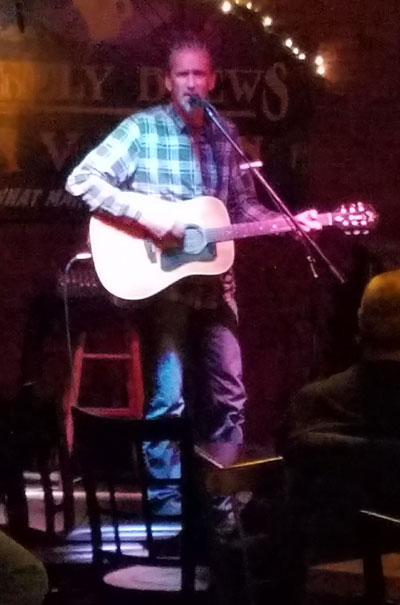 Ken LaVoie is a solo guitarist & vocalist from the Waterville Maine area, available as a singer / guitarist (aka solo acoustic musician). Ken can also be booked as an opening act. He plays covers of songs from the genres of classic rock, southern rock, & new & traditional country. View Ken's setlist for a better idea of his style and repertoire. For more information, visit Ken's awards page, & listen to some recordings of his music. Ken can also be reached directly at ken@kenlavoie.com If the navigation menu above is not functioning in Chrome, use the menu at the bottom of the page.

"I remember playing for the band Cherokee years ago. From time to time, we'd give our lead vocalist a break and the band would do a couple of songs without him. I remember how hard that was to fill his shoes and make the band still sound full and have that "energy and magic" without him out front. I always admired that quality...the indespensible talent of single handedly entertaining, and that admiration has led me to give it a try."

My genre is basically my father's music. Classic rock, southern rock, & new & traditional country (see my setlist page for an idea). I am available for solo acoustic / electric shows, including fundraising events.

My style is to honor the original song that I'm playing, while adding my own color. Most of my songs are intended for full bands. Solo acoustic musicians tend to focus on a good beat and smooth vocals. Having been a lead guitar player, I can't be satisfied just strumming. I like to add some dynamics, something to set me apart. However, it's just me and the guitar. No loopers, no harmonizers, drum machines, etc. That may change in the future, but for now I'm sticking with brutal simplicity.
Side Note: "Rock & Roll is music for the neck down" is a quote I read once in an interview with Keith Richards. I have always appreciated this sentiment. It implies playing from the "heart" ... nothing cerebral, all heart, soul and body, and this is the way I like it. I tend to overthink things in "real life", so music is my opportunity to get completely out of my head and feel the music.